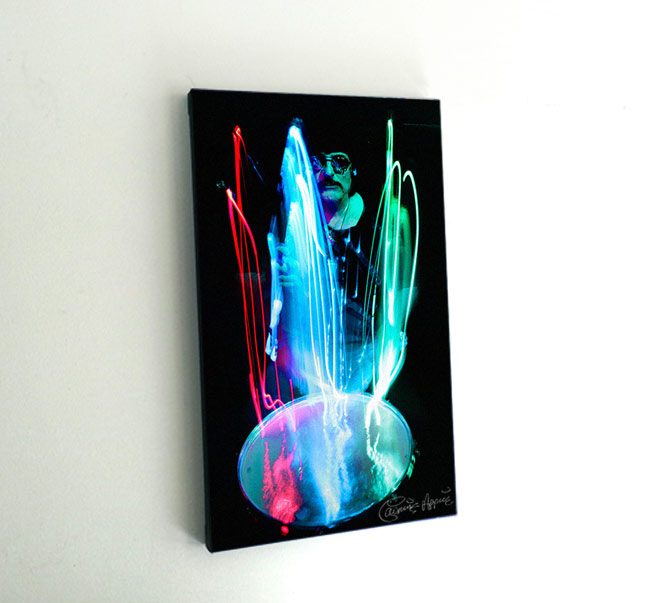 Much like a self-portrait, In Space focuses on the artist at-work during the creation of rhythm for canvas. In Space showcases the floor tom and the movements of the drummer crafting rhythm uzing 3 colors. Powerful with or without Chromadepth, each In Space canvas ships with Chromadepth glasses for another visual experience.

Measuring 18"x 30" on canvas, there are a total of 60 in the edition. All are numbered and individually signed by Carmine Appice.

The Sizzler
GET PRICING


Currently celebrating his 50th Anniversary as a recording artist and touring musician, Carmine Appice is a world famous musician, author and music educator. He has played drums as a member of Vanilla Fudge; Cactus; Beck, Bogert & Appice, Blue Murder, King Kobra, The Platinum Rock All Stars, and he has also lent his talents to Rod Stewart, Ted Nugent, Ozzy Osbourne and Pink Floyd, among others. Appice’s autobiography, Stick It! remains a best seller. His innovative percussion has earned him considerable recognition among fans and critics alike, and earned him a spot, under 30, in Rolling Stone’s Top 100 Drummers Of All Time list. He currently lives in New York and Los Angeles.


To mark his 50th year of making records, Carmine Appice has unveiled an extraordinary project...a highly limited collection of artwork. The collection titled Purple was crafted by Carmine Appice to showcase his rhythm onto canvas. Utilizing drumsticks that light in various ways, Appice worked with art team/publisher SceneFour to craft the visuals in the collection. Also notable is the use of a Chromadepth color palette. The first drummer in the medium of rhythm-on-canvas to explore this new dimension, each piece in Carmine Appice's art collection ships with Chromadepth glasses to view the artwork. Though the art looks incredible without the glasses, once the artwork is viewed through the Chromadepth glasses, a slightly different visual perspective is seen with colors moving forward in a unique and interesting way.